Four protagonists and their families are accompanied in the film over a period of three years in their life decisions.

Elisabeth Kais spent the 84 years of her life in her village, when all of a sudden she is forced to leave her home forever. Peter Sojma did already emigrated to Germany in the 90s, but he returned after a short time. Today, as vice-mayor, he tries to repair the bad roads in order to make the valley accessible again from the outside. Vitali Fedak is the father of a young daughter. Since the wages from his work in the sawmill are no longer sufficient to support his family, he is faced with the question of whether he should go to the Czech Republic to work. For Joseph Horkawtschuk, emigration was never an option, he discovered tourism as a source of income and wants to open the first local ski area. Therefore he is looking for a used ski lift to import from the west.

Lukas Pitscheider was born in 1987 in the South Tyrolean Dolomites. At 18 he set out into the wide world, first as a car stopper, later as a war reporter and street musician on many wild adventures. His favorite destinations are the Middle East, Eastern Europe and the Balkans. He studied ‘Journalism & New Media’, history and political science in Vienna and Innsbruck. After working for German ZDF as a correspondent he entered the film industry as a career changer. His debut film, The Last Austrians, will be released in 2020. He is also the founder and director of DOLOMITALE Filmfestival in Val Gardena. 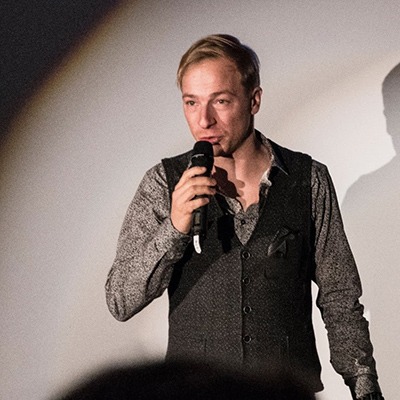